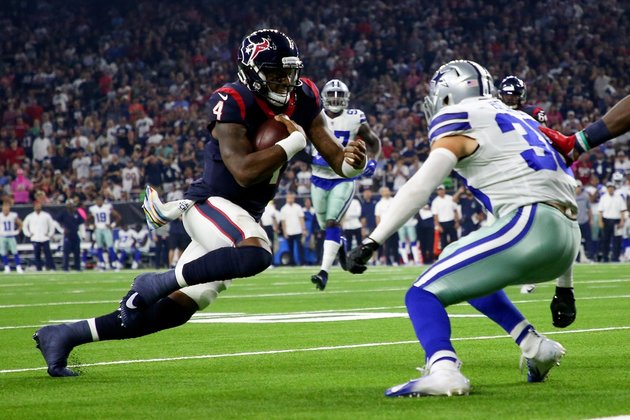 The question following the Texans' overtime win over the Dallas Cowboys last week centered on the health of Houston quarterback Deshaun Watson. He has been dealing with a rib injury for about a month and has been sacked 18 times this season while taking 53 hits.

Although Watson was only sacked once against the Cowboys, he took some heavy hits, leading to speculation that he might not play against Buffalo.

Watson ended that discussion early this week when asked whether he was going to play Sunday.

"For sure," he said. "Another day in the office recovering from the game, getting ready for Buffalo."

The Texans ranked 22nd in total offense after their first two games -- losses to the Patriots and the Titans. But they have moved all the way up to third after gaining 466 yards against the Indianapolis Colts and 462 against the Cowboys, both of which Houston won.

The Texans will try to protect Watson against a Bills defense that leads the NFL in sacks with 22.

Buffalo relies on a lot of players to rush the passer, with defensive ends Jerry Hughes and Trent Murphy leading the way with 3.0 and 2.5 sacks, respectively.

The Bills have forced eight turnovers in their past three games, winning two of them.

If he has time, Watson has receivers who can provide a deep threat.

The Texans' top receiving threat is DeAndre Hopkins, who leads the NFL in receiving yards per game (118.8), and defenses have been doing their best to prevent him from producing a big play.

"They want to make us earn those yards and be able to move down the field in 12 or 13 plays throughout," Watson explained. "That should be in every defensive game plan. Never give up the big play, never let the ball go over your head. We respect that and we just try to find open holes in it."

Houston head coach Bill O'Brien says Watson is particularly productive when the Texans have a sizable gain on first down.

Houston will also try to get its running game going with running back Lamar Miller probably returning after missing last week's game with a chest injury. Running the ball will be a challenge against the Bills, who yield just 96.2 yards per game on the ground.

The Bills have a different way to protect their quarterback, rookie Josh Allen. They run the ball, primarily with LeSean McCoy.

There were reports early in the week that the Eagles were trying to work a trade to acquire McCoy, and Bills head coach Sean McDermott addressed it this week.

"Just to get out in front of this LeSean thing a little bit here as best I can, LeSean is one of our better players, thought he had a good game the other day and we're just looking forward to playing the Houston Texans," McDermott said Wednesday. "We get calls all the time, incoming calls happen all the time, Brandon (Beane, Bills general manager) and I talk a lot and I won't go into any more detail than that."

Sunday was by far McCoy's best game of the year. He has just 170 rushing yards while averaging 3.8 yards per carry in the four games he has played this season.

Allen threw just 19 passes Sunday, completing 10, in the 13-12 victory over the Tennessee Titans. McCoy ran the ball 24 times for 85 yards, and Chris Ivory had 14 carries for 43 yards.

"He's a young player, so I think if you give a young player too much information, sometimes that can cloud them up," said offensive coordinator Brian Daboll, explaining why he is leaning on the running game. "There's a fine line between not giving them enough and then giving them too much. Each week, I think we try to balance it the best we can in terms of the amount of plays, the responsibilities."

Allen has completed just 53.3 percent of his passes for a team that ranks last in passing offense, averaging just 121.8 yards per game.

Allen was sacked just once by the Titans, but the Texans offer a challenge with defensive ends J.J. Watt and Jadeveon Clowney.

Watt is tied for the league lead in sacks with six, and all six came in the past three games. Clowney has 12 total tackles, 2.5 sacks, six tackles for loss, six quarterback hits and a fumble recovery that resulted in a touchdown.

Americans continue to shun use of masks

ALEXANDRIA, VIRGINIA - At a grocery store in Alexandria, Virginia, customer Laura Shafor was dismayed about a couple who weren't ...

MINNEAPOLIS, Minnesota - A white police officer in the U.S. city of Minneapolis seen kneeling on the neck of a ...