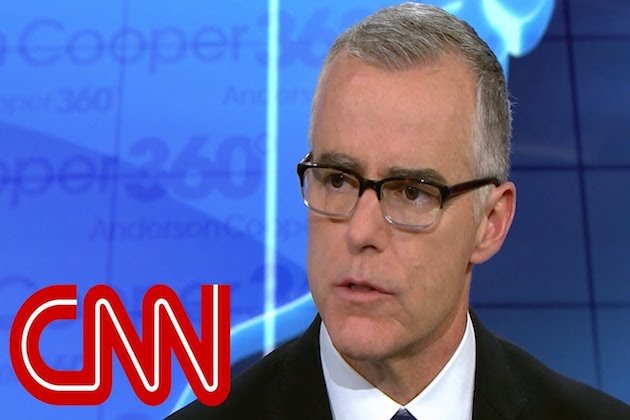 In speaking with Anderson Cooper on CNN on Tuesday, McCabe said he still believes it is possible Mr Trump is a Russian agent.

White House counselor Kellyanne Conway initialy when asked about the remark said the question did not dignify a response, but then said, "He's a liar and a leaker."

Anderson's question to the former acting top FBI official was: "Do you still believe the president could be a Russian asset?"

McCabe responded: "I think it's possible. I think that's why we started our investigation, and I'm really anxious to see where Mueller concludes that."

McCabe began his career with the FBI as a street agent in the FBI's New York bureau under director Louis Freeh. He became an expert in two kinds of investigations that are critical to American national security: Russian organized crime, which is inextricably linked to the Russian state, and terrorism.

Under Director Robert Mueller, McCabe led the investigations of major attacks on American soil, including the Boston Marathon bombing, a plot to bomb the New York subways, and several narrowly averted bombings of aircraft.

While serving under James Comey, McCabe was deeply involved in the controversial investigations of the Benghazi attack, the Clinton Foundation's activities, and Hillary Clinton's use of a private email server when she was secretary of state.

On 16 March last read, a day before he was due to retire from the FBI that he had served with distinction for more than two decades, McCabe was fired from his position as deputy director of the FBI.

President Trump later tweeted: "Andrew McCabe FIRED, a great day for the hard working men and women of the FBI - A great day for Democracy."

On Wednesday when asked about recent interviews by McCabe, the president labelled him a "disaster."

"Well, I think Andrew McCabe has made a fool out of himself over the last couple of days, and he really looks to me like sort of a poor man's J. Edgar Hoover," Trump told repoters at the White House on Wednesday. "He's a, I think he's a disaster.  And what he was trying to do was terrible and he was caught.  I'm very proud to say we caught him."

"So we'll see what happens.  But he is a disgraced man.  He was terminated, not by me; he was terminated by others. The IG report was a disaster, a disaster, from his standpoint.  Anybody reading the IG report would say, "How could a man like this be involved with the FBI?"  And the FBI has some of the greatest people, some of the finest people you'll ever meet.  But this man is a complete disaster," the president said.

Officials say that seven civilians have been killed and six others wounded in a roadside bomb attack in northern Afghanistan.The ...

Tensions between U.S. black communities and police go back centuries

Outrage over racial profiling and the killing of African Americans by police officer ...

WASHINGTON, DC - Under siege in the White House, President Donald Trump is aggravating America's latest racial anguish in a ...

NEW YORK, New York - Stocks in the United States, and across the world were in demand again on Tuesday, ...

Chinese solid waste imports down by nearly 50% this year

BEIJING, June 2 (Xinhua) -- China is now moving closer and vows to achieve its goal of halting all imports ...

CO CORK, Ireland - A U.S. manufacturer of essential oils, health and wellness products is developing a manufacturing plant near ...

Dubai getting back to business after lengthy break

DUBAI, UAE - Malls throughout Dubai are slowly building their business after being dormant for some weeks due to the ...

News Corp's closing of its community and regional papers, with few remaining and others online-only, cancels centuries of beliefs about ...