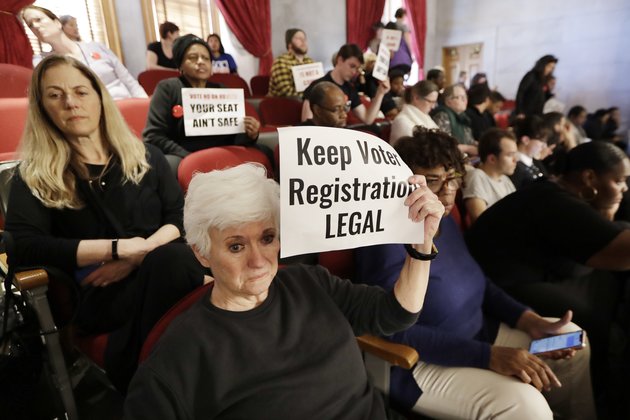 NASHVILLE, TENNESSEE - A federal judge on Monday sternly criticized Tennessee's new restrictions for signing up voters and refused to dismiss a legal challenge against the new law set to take effect in October.

Trauger's strong words about the new restrictions - which Tennessee Gov. Bill Lee signed into law earlier this year - applied to two lawsuits currently seeking to block the rules from being enforced.

Trauger denied the state's attempt to dismiss the lawsuits and issued lengthy warnings about the law's likely "chilling effect" on organizations and individuals who seek to register new voters in Tennessee.

The law is likely the nation's first to fine groups for turning in too many incomplete registration forms. It also imposes misdemeanor charges for other intentional infractions of new rules. Only paid groups could be penalized under the law, though the legal filings contend the distinction is unclear due to the groups' use of grant money and stipends for workers in certain cases.

"While it is conceivable that some large, smoothly functioning organizations which limit themselves to heavily planned voter registration activities might be able to comply with the pre-registration requirement without too great a hardship, that is no basis for chilling the speech of organizations for which it would be a burden," Trauger wrote.

Previously, Hargett's office has said many of the 10,000 registrations submitted in and around Memphis last year by the Tennessee Black Voter Project on the last day for registering were filled out incorrectly.

Under the new law, the state can fine groups that submit 100 or more incomplete voter registration forms that lack a name, address, date of birth, declaration of eligibility or signature. Penalties can reach $10,000 per county where violations occur if more than 500 incomplete forms are submitted. The bill also outlaws out-of-state poll watchers.

"Tennessee's law is one of the most restrictive voter suppression measures that we have seen this year. This is nothing more than a thinly veiled attempt to discourage and deter people from helping others to register to vote," said Kristen Clarke, president and executive director of the Lawyers' Committee for Civil Rights Under Law, in a statement in response to Trauger's decision.

In her ruling, Trauger questioned why the law required voter registration organizers to file sworn statements confirming they would comply with the law - adding that "the law is the law already, no one has to swear to follow it in order for it to apply."

Furthermore, Trauger questioned the necessity of imposing training requirements on voter registration organizers, as currently outlined in the law.

"If Tennessee is concerned that voter registration drives are being done incompetently, it can engage in public education efforts without relying on a complex and punitive regulatory scheme," she wrote. "If it is concerned that the drives are being done fraudulently - for example, by a person or organization collecting forms and never turning them in - it can punish the fraud rather than subjecting everyone else to an intrusive prophylactic scheme that true bad actors would likely evade regardless."

Caribbean and Latin America deadliest region in world for journalists

It has been a deadly decade for journalists across the world, however last year there was a glimmer of hope ...

BAGHDAD, Iraq - Two rockets have landed near the U.S. embassy in Baghdad located in the heavily fortified Green Zone, ...

Taking a look at the politicisation of antisemitism

LONDON, UK In 2004 Greg Philo and Mike Berry authored Bad News from Israel, a ground-breaking work for the Glasgow ...

Grandson of JFK urges Republicans to break ranks with Trump

WASHINGTON - Key players in the impeachment trial of U.S. President Donald Trump and his defense argued sharply Sunday whether ...

SYDNEY, Australia - Stocks in Asia tumbled on Tuesday with fears about a divided America, ahead of the president's impeachment ...

AUSTIN, TEXAS - With China poised to increase purchases of U.S. agricultural goods this year as part of a Phase ...

DUBLIN, Ireland - Apple has been recognised as one of the greatest foreign direct investors in Ireland.The company on Monday ...

BEIJING, China - There are currently eleven nuclear power units under construction in China, the largest number of nuclear power ...

SAN JOSE, California - Apple has added a new toggle that addresses privacy concerns around the location tracking feature on ...

DUBAI, UAE - The 800MW third phase of Dubai's solar park will be operational in April, the Dubai Electricity and ...