Myanmar accused of doing nothing to end Rohingya persecution 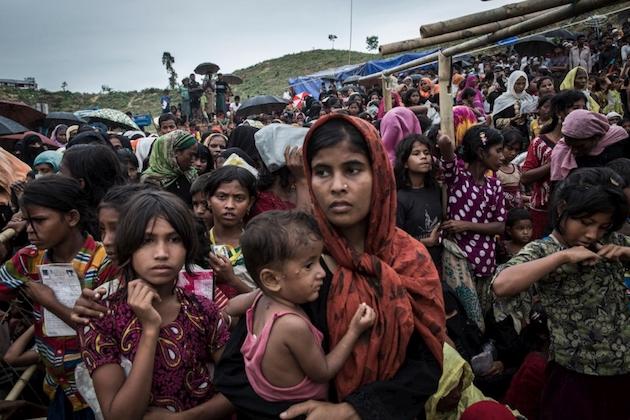 NAYPYIDAW, Myanmar - Hundreds of thousands of ethnic Rohingya who remain in Myanmar may face a greater threat of genocide than ever, amid government attempts to "erase their identity and remove them from the country", UN-appointed independent investigators said on Monday.

In a report detailing alleged violations in Myanmar over the last year, the Independent International Fact-Finding Mission, insists that many of the conditions that led to "killings, rapes and gang rapes, torture, forced displacement and other grave rights violations" by the country's military, that prompted some 700,000 Rohingya to flee to neighbouring Bangladesh in 2017, are still present.

Citing the lack of accountability for the perpetrators of these alleged crimes, as well as the failure by Myanmar "to investigate genocide and to enact effective legislation criminalizing and punishing genocide", the UN-appointed independent panel concludes "that the evidence that infers genocidal intent on the part of the Statehas strengthened, that there is a serious risk that genocidal actions may occur or recur".

Echoing those findings, Special Rapporteur on the situation of human rights in Myanmar, Yanghee Lee told the Human Rights Council earlier on Monday that Myanmar had "done nothing to dismantle the system of violence and persecution" against the Rohingya who live in the "same dire circumstances that they did, prior to the events of August 2017".

Of nearly 400 Rohingya villages apparently destroyed, "there has been no attempt to reconstruct 320 of them", the Special Rapporteur noted, and four in 10 villages had been "completely razed to the ground".

Some of that demolition occurred in 2018 and some even in 2019 "and all of this is completely antithetical to the claim that Myanmar is ready to receive the refugees (back from Bangladesh)", Ms. Lee insisted.

According to the International Fact-Finding Mission's near 200-page report, the abuses it found were not on the same scale as the "clearance operations" conducted against Rohingya communities in the summer of 2017.

Nonetheless, the 600,000 mainly-Muslim Rohingya still in Myanmar "remain the target" of Government efforts to remove them from the country, the expert panel insisted.

The threats the Rohingya minority face include a "continuation of hate speech" and discrimination that affects their ability to work, attend school, seek medical care "or even pray and congregate", the report notes.

Echoing those comments, Ms. Lee insisted that Myanmar "continues to be a State that commits ongoing gross violations of international law".

Humanitarian access remains severely restricted by the State, she went on, and all those involved in the violence among them, the Tatmadaw State military and the Arakan separatist army have been responsible for "indiscriminateheavy artillery fire, gunfire and landmines in civilian areas" linked to the displacement of some 65,000 people across northern Rakhine and southern Chin states since January.

Highlighting information about "reprisals, surveillance and harassment" of people in Myanmar and outside the country who have cooperated with international human rights mechanisms, Ms. Lee urged the international community to continue to scrutinize events in Myanmar.

"The parties to the conflict must end their hostilities the people of Rakhine have suffered enough," she insisted.

In addition to reports of up to six villages being burned deliberately since the end of June, the Special Rapporteur also noted with concern that the Government-imposed internet blackout has been in place for nearly three months in Kyauktaw, Minbya, Ponnagyun and Mrauk-U, "where the worst fighting is happening".

Conflict escalated on 15 August when separatists launched attacks in northern Shan and Mandalay, Ms. Lee explained, "killing and injuring soldiers, police officers, and civilians". This sparked intense fighting between the Tatmadaw State military and the ethnic armed organizations in northern Shan which led to the death of a farmer killed when Tatmadaw "reportedly fired mortars into his village as people were fleeing military helicopters conducting air strikes nearby".

While welcoming the separatists' unilateral ceasefire declared last week ahead of peace talks with the Government's National Reconciliation and Peace Commission scheduled for Tuesday, Ms. Lee questioned whether the Tatmadaw were serious about bringing about peace after launching operations against Ta'ang National Liberation Army (TNLA) separatists despite also saying that they were laying down their weapons.

In a statement, the six Special Rapporteurs said that some 200,000 refugees had gathered for the rally in Cox's Bazar to mark the second anniversary of their exodus from Myanmar.

Demonstrators called for Myanmar citizenship rights and other guarantees before they would agree to return.

"Since the demonstration at Cox's Bazar on 25 August, a number of the protest organisers have been questioned and subjected to intimidation," the experts said.

A curfew is also being strictly enforced on those in the camps, they added, while mobile phones have been banned and confiscated.

In response to the allegations, the delegation for Myanmar maintained that the country faced development and human rights challenges, which were one and the same thing.

The Myanmar constitution prohibits the targeting of minorities, Ambassador Kyaw Moe Tun insisted, before adding that there had been only temporary internet shutdowns in Rakhine and Shan states in response to insurgents' alleged use of wireless technology to detonate bombs.

Blaming separatists for the Rohingya exodus in 2017, the Ambassador maintained that the tragedy had been exploited for political purposes.

"It is crystal clear" that there are people who want to return to Myanmar, he added, before rejecting any attempt by the international community to prosecute State military figures allegedly responsible for grave rights violations against the Rohingya unless all national remedies had been exhausted.