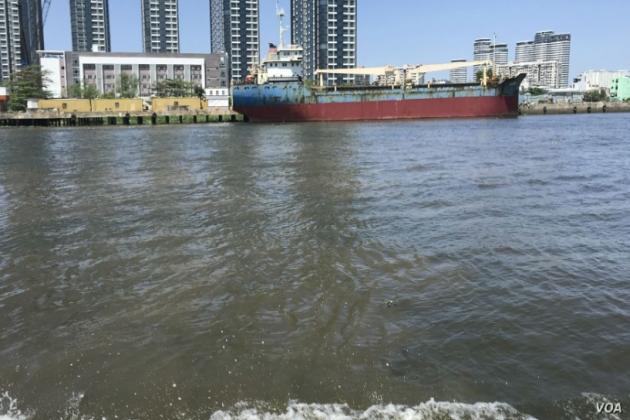 HO CHI MINH CITY - Carbon emissions are growing faster in Vietnam than any other country in the world, according to a recent analysis of world energy by oil and gas company, BP. The finding gives more urgency to a report released Monday by the World Bank which offers recommendations on how Vietnam can decrease its carbon emissions and meet its Paris climate change targets.

The authors of the 130-page report focus on the growing transport industry and recommend Vietnam shift more of its transportation from the roadways to the waterways, either along the coast or inland.

"A resilient transport system is critical to the continued success of Vietnam's economy, which relies heavily on external trade and seamless connectivity," said Ousmane Dione, World Bank country director for Vietnam based in Hanoi. "We hope that the findings and recommendations of this new report will help Vietnam in its efforts to achieve a resilient and sustainable transport sector."

The report analyzed eight solutions that Vietnam could test to decrease transportation's greenhouse gas emissions, from use of public transit, to an increase in biofuels. The report concluded that the most effective solution would be the shift from ground- to water-based transport, leading to a decrease of 22.8 million tons of carbon dioxide by 2030.

The second most effective solution would be to improve fuel economy and emissions standards, leading to a decrease of 15.8 million tons of carbon dioxide by 2030, the report said.

Shift from land to water, rail

Vietnam has a long coastline of 3,218 kilometers and two large river deltas in important locations, such as the Mekong in the south near Ho Chi Minh City, and the Red River in the north near Hanoi. Though these channels are currently being used to transport goods, there is an increasing reliance on container trucks on the road. This makes further investment in waterways upgrades necessary if Vietnam is to reclaim its share of the transport sector, the report said.

With one of the highest economic growth rates on the planet, Vietnam has an increasing share of world trade that demands more energy resources and transport of products. This development is also leading to more energy consumption across the board, from an expanding middle class buying cars, to a construction sector building more condos and offices. Environmentalists have responded by asking Vietnamese to find alternative sources of energy overall.

"As a country with diversified and abundant renewable energy potential, Vietnam shall gain many benefits if accelerating early shifting to clean energy development," said Nguy Thi Khanh, director of the Green Innovation and Development Center, or GreenID, a nonprofit environmental organization based in Hanoi.

She added that moving toward more renewable energy use would "reduce dependence on imported fossil fuels, reduce pollution, mitigate climate change," and have multiple other socioeconomic benefits.

In addition to a shift to water-based transport, the World Bank recommends a mix of other solutions to decrease emissions, including a greater use of electric vehicles, cleaner fuel standards, investment in public buses and subways, and a shift from road to rail transport.

A balanced approach could decrease emissions in Vietnam's transport sector by 9% by 2030, the report said, and could decrease by 20% with the support of international donors and private companies.

When this writer recently looked into the mirror and took a good look at how long his hair had grown ...

How London's 100 or so billionaires are faring

Over cups of tea in his ramshackle London home I chatted with a novelist. It felt a valuable opportunity, given ...

Are the Golden Days over?

As lockdown measures start to be eased in most countries around the world, the experts of The Conversation's global network ...

CANBERRA, Australia - Australian Federal Police said Wednesday they were dropping an investigation of a prominent journalist who obtained classified ...