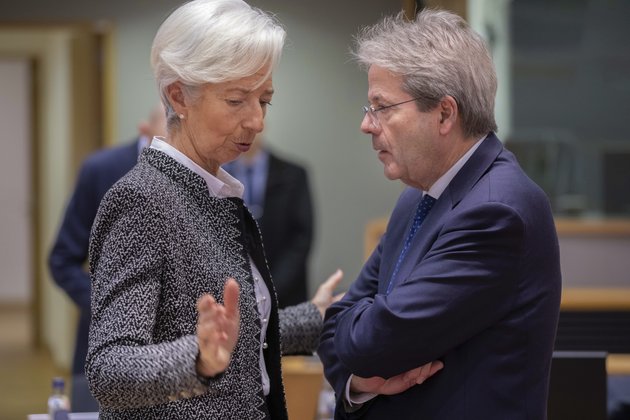 FRANKFURT, GERMANY - Central banks in the United States and Europe say they've done their part to help the economy for now. The European Central Bank on Thursday decided to leave it stimulus programs unchanged as its new president highlighted signs that the economy has steadied after a period of weaker growth.

ECB head Christine Lagarde said that recent economic indicators are ``weak overall'' but "point to some stabilizing in the slowdown of of economic growth."

The decision to keep interest rates low followed a similar move this week by the U.S. Federal Reserve, where officials indicated they expect no change through 2020.

The ECB enacted a stimulus package as recently as September, when it cut a key rate and launched a bond-buying program that pumps newly created money into the economy. Lagarde said that package, decided before she took over from Mario Draghi on Nov.1, would continue to support the economy with easier borrowing terms for companies.

Doubts have grown among some economists about how much good more central bank stimulus can do to support developed economies.

Interest is meanwhile focused on Lagarde, who presided over her first meeting as head of the institution that sets monetary policy for the 19 euro countries that use the euro and their 342 million people. She is well known from her previous jobs as head of the International Monetary Fund and as French finance minister but investors will want to see how she communicates and explains the complexities of monetary policy to markets and voters.

Other themes that were getting attention were Lagarde's plans for a review of the bank's monetary policy framework and how it defines price stability, the goal it is supposed to seek under the European Union treaty. There's also been discussion of whether the ECB should do more to support financing of projects aimed at fighting environmental pollution and climate change.

Analysts are looking also for signs on how she will manage dissent on the ECB's 25-member governing council. A minority criticized the measures enacted under predecessor Mario Draghi on Sept. 12.

Those included a cut in the deposit rate to minus 0.5% from minus 0.4%. The rate is charged on excess cash left at the central bank overnight by commercial banks, so the negative rate is in effect a penalty that aims to push banks to lend the money to companies. The bank also started 20 billion euros ($22 billion) in monthly purchases of government and corporate bonds.

The San Francisco 49ers are on their way to Miami to face the Kansas City Chiefs in Super Bowl LIV. ...

Grandson of JFK urges Republicans to break ranks with Trump

WASHINGTON - Key players in the impeachment trial of U.S. President Donald Trump and his defense argued sharply Sunday whether ...

ABUJA, Nigeria - The Indian Mission in Nigeria on Sunday said that 20 seafarers who were kidnapped by pirates last ...

Prince Harry and Meghan to cut formal ties with Palace

BEIJING, China - There are currently eleven nuclear power units under construction in China, the largest number of nuclear power ...

SAN JOSE, California - Apple has added a new toggle that addresses privacy concerns around the location tracking feature on ...

DUBAI, UAE - The 800MW third phase of Dubai's solar park will be operational in April, the Dubai Electricity and ...

WASHINGTON, DC - The Pentagon on Thursday awarded more than half-a-billion dollars in defense contracts.With around 0.53 cents in every ...