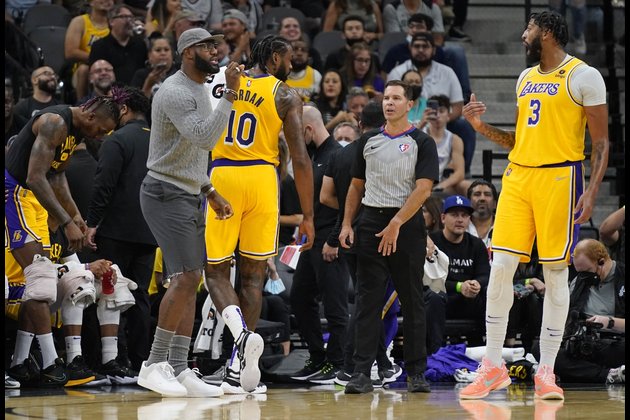 Anthony Davis racked up 35 points and grabbed 17 rebounds, Russell Westbrook added 33 points and 10 rebounds, and the pair hit the final two baskets of the game to lift the visiting Los Angeles Lakers to a 125-121 overtime win over the San Antonio Spurs on Tuesday.

Playing without LeBron James, who was ruled out hours before the game with right ankle soreness, the Lakers pulled out to a six-point lead in the extra period before San Antonio rallied to tie the game at 121. Davis then grabbed an offensive rebound and scored, the Spurs' Devin Vassell missed a 3-point shot, and Westbrook slammed home a dunk on the ensuing possession to finish off San Antonio.

The Spurs led by 12 points heading to the fourth quarter but Los Angeles forged a 17-4 run to take a 102-101 advantage with 7:11 to play. A layup by San Antonio's Keita Bates-Diop with 32.2 seconds left ultimately sent the game into the extra period.

San Antonio went 1-for-9 from the free-throw line in the fourth quarter and overtime.

Malik Monk added 17 points and Austin Reaves had 10 for the Lakers, who have won two straight after losing their first two outings of the season. James suffered his injury in the second quarter of Los Angeles' win over Memphis on Sunday.

San Antonio led 29-27 at the end of the first quarter despite 10 points in the period from Davis. The Lakers jumped back in front on a 3-pointer by Kent Bazemore at the 7:38 mark of the second quarter and led by as many as six points over the last half of the period until Walker IV canned a jumper from beyond the arc with 1.7 seconds remaining to push the Spurs to a 62-61 lead at the break.

Davis led all scorers at halftime with 16 points, with Westbrook adding 12 for the Lakers. San Antonio had four players in double figures scoring in the first half, led by Murray's 13 points. Vassell and Walker IV had 11 and 10 points, respectively, off the bench for the Spurs by halftime.