No. 22 Tennessee dominates second half to defeat Butler 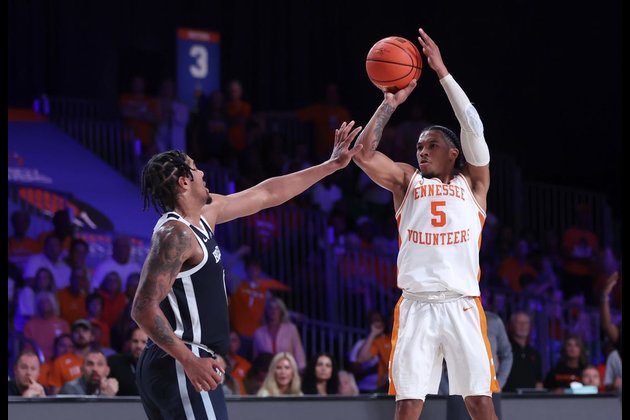 Santiago Vescovi had 13 points, three rebounds and three assists to help No. 22 Tennessee pull away in the second half for a 71-45 victory over Butler in the first round of the Battle 4 Atlantis at Paradise Island, Bahamas.

Vescovi and Julian Phillips, who had 11 points and six rebounds, highlighted a balanced effort on the scoresheet for the Volunteers (3-1), who advance to play USC in the tournament semifinals on Thursday afternoon.

Butler (3-2) will take on BYU in the consolation bracket on Thursday night.

Tennessee spread the ball around well and finished with five players scoring nine or more points and seven players scoring six or more. Zakai Zeigler had 10 points, five assists and four rebounds. The Volunteers totaled 16 assists despite turning the ball over 16 times.

Butler wasn't nearly as careful with the ball as it committed 23 turnovers, which allowed the Volunteers to take control after halftime.

Zeigler and Vescovi each turned up the intensity on the defensive end in the second half and finished with three steals each. Tennessee scored 18 points off those turnovers and outscored Butler 36-14 in the paint.

Jayden Taylor led the Bulldogs with 18 points but was their only player who scored in double figures.

Butler shot only 31.9 percent (15-for-47) from the field and made only 5 of 23 attempts from beyond the arc. The Volunteers also hit five 3-pointers, but were a much more efficient 48.1 percent from the field overall.

Tennessee trailed 23-18 before closing out the first half with 10 consecutive points capped by a Zeigler 3-pointer. The surge carried over to the second half and became a 14-0 run until Manny Bates swished a free throw with 18:29 left.

Butler would pull within a bucket again at 36-34 with 14:47 left on a dunk by Pierce Thomas. But the Volunteers again responded with a 17-1 run keyed by Phillips and Vescovi, and led by as many as 28 points in the second half.

WASHINGTON, D.C.: According to a Pentagon report, if China continues with its current nuclear buildup pace, it could have a ...

William, Kate plan US trip in bid to tamp down royal controversies

LONDON, England: Prince William and his wife Kate, the new Prince and Princess of Wales, will travel to the U.S. ...

SYDNEY, Australia: For the first time in eight years, Australia lowered its terrorism threat level from "probable" to "possible," due ...

TRENTON, New Jersey: As part of a project to prevent major wildfires in a federally protected New Jersey forest, up ...

VIENNA, Austria: During a 24-hour strike by Austrian rail workers held this week over issues related to pay, rail traffic ...

Apple returns to Twitter after Musk meeting with Tim Cook

WASHINGTON D.C.: According to U.S. rail company Amtrak, its ridership has nearly returned to pre-COVID-19 levels, rising by more than ...

TOKYO, Japan: The results of a survey released this week showed that Japan's manufacturing activity contracted for the first time ...

ATLANTA, Georgia: As companies look to rein in costs and trim their headcount to brace for an economic slowdown, CNN's ...