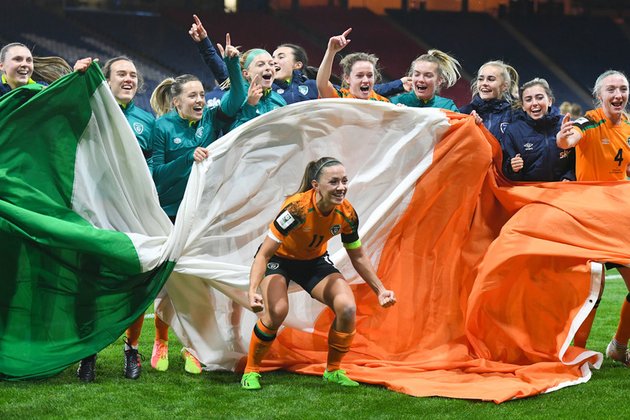 The players were found to have ?violated rules of decent conduct?

The Football Association of Ireland (FAI) has been issued with a fine of €20,000 ($21,000) by UEFA for what was described as "the violation of the basic rules of decent conduct" after several members of its women's team were filmed singing an offensive song following a crucial World Cup qualification win against Scotland earlier this year.

The song featured lyrics from 'Celtic Symphony' by Irish folk band The Wolfe Tones, with the phrase "Ooh ah, up the 'Ra" commonly accepted as being sympathetic to the Irish Republican Army (IRA), which was a name used by various paramilitary organizations in Ireland in the 20th and 21st centuries.

One such offshoot, the Provisional IRA, engaged in a years-long terroristic campaign on the island of Ireland in protest of British rule in Northern Ireland.

And after UEFA pledged to investigate the incident, European football's governing body issued a statement on the matter on Thursday.

"Following an investigation conducted by a UEFA ethics and disciplinary Inspector regarding the potential inappropriate behavior by players of the Republic of Ireland women's team in the aftermath of the 2023 FIFA Women's World Cup qualifiers play-off second leg match played against Scotland on October 11th 2022," it began.

The Irish women's team, and its manager Vera Pauw, spoke of their regret at the incident almost as soon as the video went viral online, with Pauw saying that the player who filmed the clip and uploaded it to social media was extremely distressed following the incident - which occurred just minutes after the biggest moment of her footballing career.

In a statement of its own, the FAI noted the sanction imposed by UEFA and pledged to make sure its players are aware of their responsibilities in future.

"The FAI and the Republic of Ireland women's national team has apologized to all affected by events after the 2023 FIFA women's World Cup qualifying play-off against Scotland in Hampden Park in October," they said.

"The FAI has assured UEFA that all players and staff across all of our international teams have been, and will continue to be, reminded of their responsibilities every time they represent their country. The FAI will be making no further comment on this matter."

Similar incidents have been noted in Irish football in the past. Several years ago, current West Ham captain and England international midfielder Declan Rice landed in hot water after posting his own 'Up the 'Ra' message to social media while he was representing an Irish underage team.